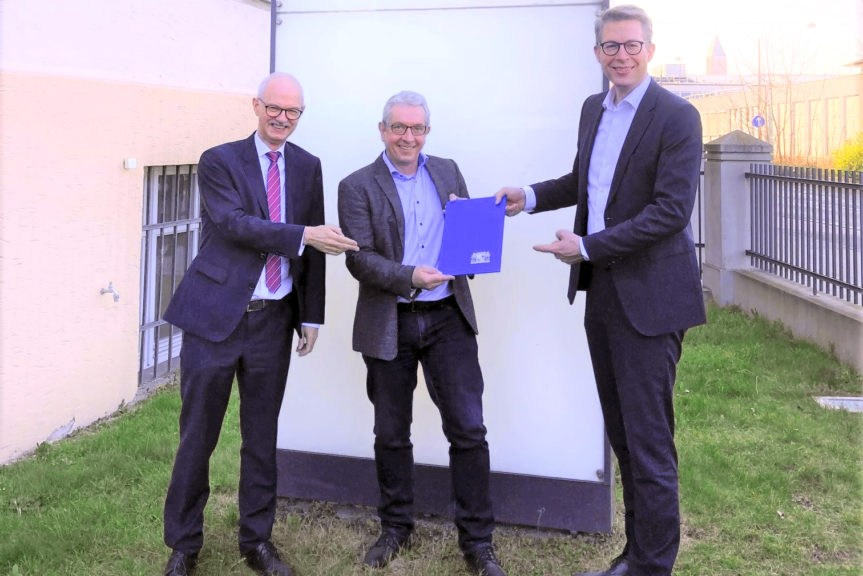 Prof. Dr. Wolfram Burgard, Founding Chair of the Department of Engineering of the University of Technology Nuremberg, has been named Professor of Excellence as one of the first scientists in Bavaria. The expert in the field of artificial intelligence and robotics was presented with the award by Bavaria’s Minister of State, Markus Blume.

NUREMBERG. For the start of the winter semester 2021/22, the Bavarian Ministry of State for Science initiated the so-called Professorships of Excellence Program under the heading “The Best for Bavaria”. The aim is to attract top-notch scientists and researchers to Bavarian universities. The newest state-run university in Bavaria received one of the first awards. Markus Blume, Bavarian Minister of State for Science and the Arts: “The Best for Bavaria: With our Professorships of Excellence Program and thanks to the Hightech Agenda Bavaria initiated by Prime Minister Dr. Markus Söder, we are attracting international top-notch scientists to Bavaria! Prof. Dr. Burgard’s field of research contributes enormously to key issues of the future, such as autonomous driving or efficient intelligent production. Based on his excellent global standing in the field of AI and robotics, he can further promote the networking activities between the numerous top-level initiatives we already have in this field of research. This, too, will help us drive forward Bavaria’s role as leading location for this important field of research.” The Professorships of Excellence Program is part of the Hightech Agenda Bavaria, focussing on top-level research funding. Professors of Excellence are appointed for a period of five years. Appointments are funded with up to five million Euro.

“I am very pleased that the Founding Chair of our Department of Engineering has been given this award. A Professorship of Excellence in a future-oriented field like AI and robotics perfectly fits the university’s profile”, Prof. Dr. Dr. h. c. mult. Hans Jürgen Prömel, Founding President of the University of Technology Nuremberg, points out. Prof. Dr. Wolfram Burgard, who was given the award, also emphasizes the benefits to society created by intensified research in the fields of AI and robotics: “It is important to know that our society is faced with a number of challenges which can be addressed by our research. Germany’s strength lies in its production facilities, and in order to compete on an international level, we need to stay ahead of the game. What we need are more intelligent machines and robots with a low instruction threshold.”

Founding Chair at the University of Technology Nuremberg since February

Prof. Dr. Wolfram Burgard has been Founding Chair of the Department of Engineering at the University of Technology Nuremberg since February 2022. He will put the focal point on the field of Artificial Intelligence and Robotics as the first focus of the University of Technology Nuremberg. Prior to this assignment, Wolfram Burgard was Professor for Autonomous Intelligent Systems at the University of Freiburg. In 1991, he completed his dissertation at the Institute of Computer Science at the University Bonn. The renowned scientist has put his focus on the combination of robotics and artificial intelligence as well as the development of innovative approaches for mobile robots. For his academic work, Prof. Dr. Burgard has earned numerous prizes and awards, among them the Gottfried Wilhelm Leibniz-Prize and the Advanced Grant of the European Research Council. Only lately, in May 2022, he was honored with the IEEE Robotics and Automation Award.

The University of Technology Nuremberg was founded on January 1st, 2021 and has been the first new foundation of a state-run university in Bavaria since 1978. With its consistently interdisciplinary approach, an innovative spectrum of subjects, new teaching methods and a future-oriented organizational structure, a model university will be created when it comes to teaching and research. The university is to have an international, interdisciplinary and digital approach. Upon completion, up to 6,000 students will be able to study on a campus embedded in the surrounding quarters.