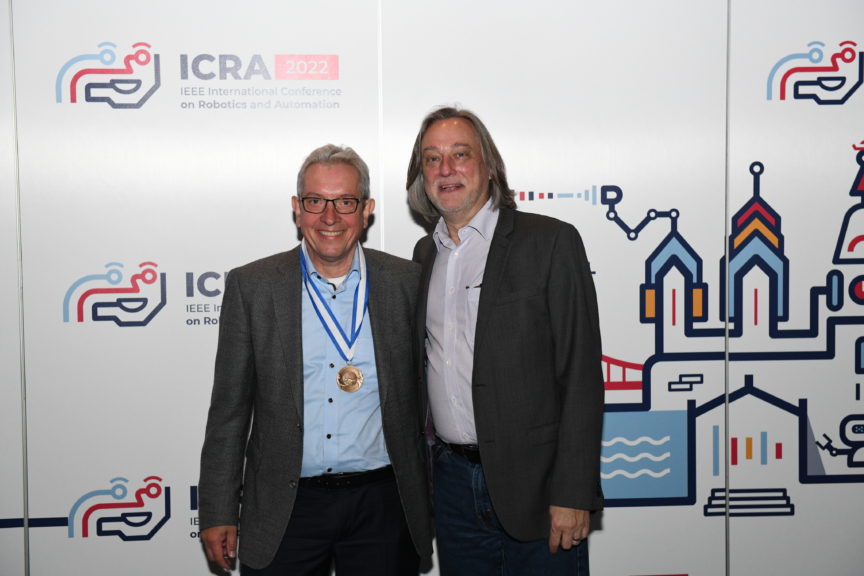 For his contribution to fundamentals and applications in the navigation and reception of robots, Prof. Dr. Wolfram Burgard was honored with the IEEE Technical Field Award for Robotics and Automation. He is only the second German scientist to receive this internationally renowned award.

NUREMBERG. With the IEEE Robotics and Automation Award, the RAS (IEEE Robotics & Automation Society) has been honoring international scientists since 2002, who have made extraordinary contributions in the field of robotics and automation, thus serving society as a whole. This year, Prof. Dr. Wolfram Burgard, Founding Chair of the Department of Engineering at the University of Technology Nuremberg, was given the award. He is only the second German scientist to receive the IEEE Robotics and Automation Award. In 2007, the jury’s vote fell on Prof. Dr. Gerd Hirzinger, former Head of the Institute of Robotics and Mechatronics at the German Aerospace Center (DLR).

“The RAS is one of the leading organisations in the field of robotics and automation and is funding research in this field on a global scale. I feel honored to be given the IEEE Robotics and Automation Award”, Prof. Dr. Wolfram Burgard is happy to concede. The award ceremony took place at the biggest international conference for robotics, the IEEE International Conference on Robotics and Automation (ICRA), held in Philadelphia from May 23rd through 27th, 2022.
“The fact that Prof. Burgard has received the IEEE Robotics and Automation Award shows how lucky we are in winning such a top-notch researcher as Founding Chair of the Department of Engineering for our university”, confirms Prof. Dr. Dr. h. c. mult. Hans Jürgen Prömel, Founding President of the University of Technology Nuremberg. “On behalf of the whole university, I would like to congratulate him for this award.”

Founding Chair at the University of Technology Nuremberg since February

Prof. Dr. Wolfram Burgard has been Founding Chair of the Department of Engineering at the University of Technology Nuremberg since February 2022. He will put the focal point on the field of Artificial Intelligence and Robotics as the first focus of the University of Technology Nuremberg. Prior to this assignment, Wolfram Burgard was Professor for Autonomous Intelligent Systems at the University of Freiburg. In 1991, he completed his dissertation at the Institute of Computer Science at the University Bonn. The renowned scientist has put his focus on the combination of robotics and artificial intelligence as well as the development of innovative approaches for mobile robots. For his academic work, Prof. Dr. Burgard has earned numerous prizes and awards, among them the Gottfried Wilhelm Leibniz-Prize and the Advanced Grant of the European Research Council. An expert in computer science, Wolfram Burgard is also a member of the National Academy of Sciences Leopoldina and an honorary member of the European Coordination Committee for Artificial Intelligence, the Institute of Electrical and Electronics Engineers and the American Association for Artificial Intelligence.

The University of Technology Nuremberg was founded on January 1st, 2021 and has been the first new foundation of a state-run university in Bavaria since 1978. With its consistently interdisciplinary approach, an innovative spectrum of subjects, new teaching methods and a future-oriented organizational structure, a model university will be created when it comes to teaching and research. The university is to have an international, interdisciplinary and digital approach. Upon completion, up to 6,000 students will be able to study on a campus embedded in the surrounding quarters.