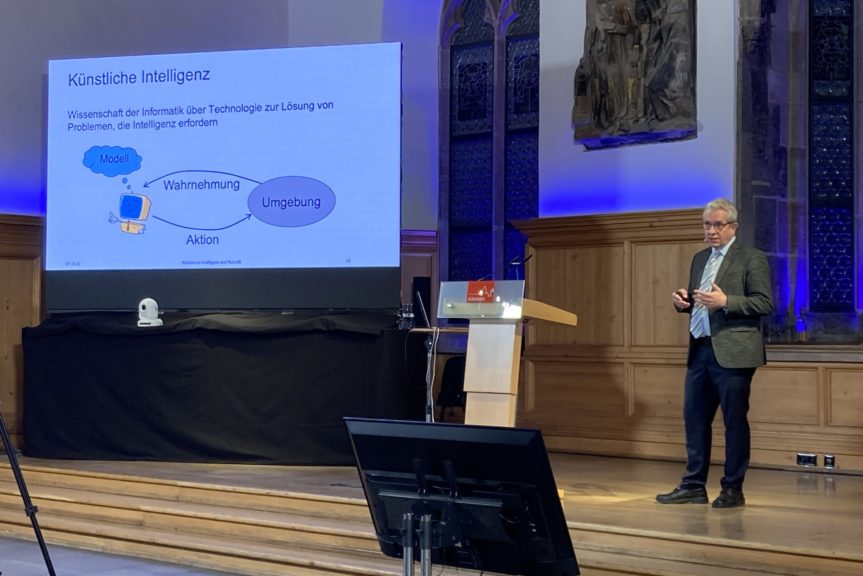 On March 7th, the second lecture of the series “University Taking Shape” was held in the Historic City Hall in Nuremberg. Under the title “Artificial Intelligence and Robotics”, which is also the first focus of the Department of Engineering of the University of Technology Nuremberg, Prof. Wolfram Burgard, renowned robotics specialist, eminent authority on artificial intelligence and Founding-Chair of the Department of Engineering at the UTN, gave an insight in the departments’ objectives and scope of work.

AI and Robotics Fit the University’s Profile
Ranging from autonomous cars and robots wending their ways through lively inner-city precincts to intelligent systems teaching themselves how to pick up things: These were some of the exciting projects Prof. Burgard has worked on so far and which were covered in his lecture. The Leibniz Award winner made clear, why his research focus fits the concept of the University of Technology of Nuremberg so well: “In my view, artificial intelligence and robotics are an extremely interesting and important field of the future for many aspects of our society. However, we will have to put these topics in a sociological context. We want to make Nuremberg one of the best locations for such an integrated approach in Germany.” The complete lecture can be accessed here.

Honoured with the IEEE Robotics and Automation Award
Prior to this assignment in Nuremberg, Prof. Burgard was Professor for Autonomous Intelligent Systems at the University of Freiburg. In 1991, he completed his dissertation at the Institute of Computer Science at the University Bonn. His focus is on the combination of robotics and artificial intelligence as well as the development of innovative approaches for mobile robots. For his academic work, Prof. Burgard has earned numerous prizes and awards. In 2022, he was honoured with the IEEE Robotics and Automation Award.

Witness the Foundation of a University
Under the heading “University Taking Shape“, everyone interested has the chance to follow the founding history of the University of Technology Nuremberg – either live at the city hall, or online via live stream. Initiators, idea providers and shapers of the future will have the opportunity to make their contributions. The next lecture is scheduled for May 10th: Ferdinand Heide, architect and drafter of the campus design for the UTN will talk about the topic “Embedded, Sustainable and Urban – the Architectural Concept of the University of Technology Nuremberg”.